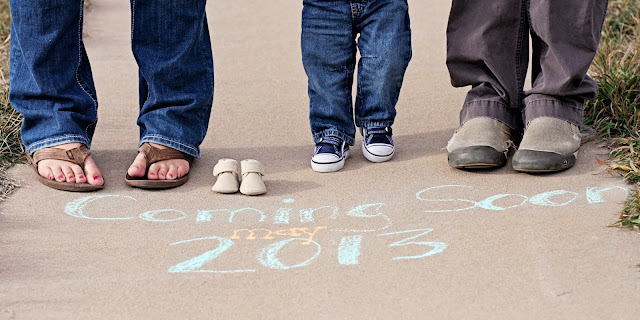 no lying here- it's been rough.
really rough.
since about week 7 (i'm 13 weeks now) i've been very sick.
most days i don't eat and when i do eat, i throw up.
not fun for anyone.

but nonetheless, we are thrilled!
thrilled to have a summer baby,
thrilled for joshua to be a big brother,
thrilled to be growing our family,
thrilled to hold another infant & call it ours,
thrilled to do it all again
(ok not thrilled about all parts of *delivering* another babe)
but thrilled.

Q: When did you find out you were pregnant?
A: We officially found out on October 4, 2012.

Q: What were your first reactions?
A: pretty much, like whoa. what have we gotten ourselves into...?

Q: What are you feeling now?
A: mostly, just feeling sick.

Q: Are you showing yet?
A: not really. i've lost a considerable amount of weight (the whole don't eat & then throw up does that) so that doesn't really help the "showing" thing. just feeling a little pudgy around the middle.

Q: How have you been feeling (sickness wise)?
A: well if you haven't figured it out so far. i've feeling pretty miserable. thankful that most days i take a morning nap with joshua and on days when i can barely move we just hang around the house and chill out. well, i try to chill out and then chase the 1 year old :) most days i'm sick most, if not the whole day. it's been rough, but we're making it through. but i will be very happy when food sounds good again...

Q: What other symptoms have you experienced?
A: hmm, exhausted. dizziness. and my hair falling out.

Q: Any strange food cravings?
A: like i said, most days ALL/ANY food sounds disgusting! but especially eggs. yuck. the few times I do want to eat it has been milkshakes and sour candies.

Q: Any gender preference or predictions?
A: I think a boy would be easier, a girl would be fun. LOTS of people are saying it's a girl...

so yes, that's me. 2nd pregnancy. techinically out of the 1st trimester.
praying this sickness goes away soon.
Posted by Kimberlee Pollard on Monday, December 03, 2012 No comments:

Kimberlee Pollard
i love Jesus, Savior of the world & my life. i love my husband. our babies are a true gift. i run. i craft. i blog because i don't remember anything... this life, this love is beyond greatness.